Challenges With Each Model

For at least 150 years, “evidence-based medicine” has been at the heart of medical education and healthcare delivery in the Western world. Since at least 1946, the randomized controlled clinical trial (“RCT”) has been the “gold standard” for developing such evidence.

However, RCT’s are expensive, lengthy, with restrictive inclusionary criteria and typically dedicated to a proprietary medical product. The consequence is limited clinical translation, to the detriment of patient care. A 2020 article in the Journal of Clinical Epidemiology reported that only 1 in 10 medical treatments is backed up by clinical evidence. 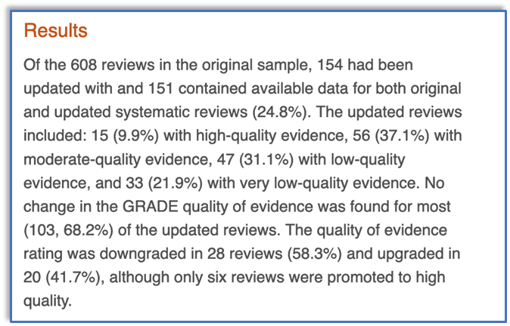 Moreover, the level of evidence for RCT’s, compared with patient registries and other forms of studies, has been challenged in several contexts. In their extensive 2020 report on the topic, the U.S. Department of Health and Human Services noted that “studies from patient registries and randomized controlled trials have important and complementary roles in evaluating patient outcomes.”

Similarly, the Grading of Recommendations, Assessments, Development and Evaluation working group has noted:

The FDA, EMA and other regulatory agencies have also recognized the limitations of traditional RCT’s in the context of clinical and policy decision-making. They have emphasized the importance of real-world evidence. 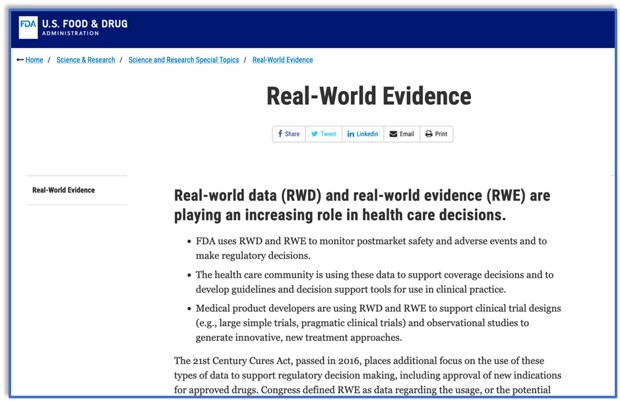 RWE is also the foundation of healthcare reimbursement concepts such as value-based medicine. The U.S. 21st Century Cures Act, “Right-To-Try laws and similar legislation are based on the applicability of RWE. Real-world evidence is not only regularly used to support reimbursement, but also increasingly informs the healthcare decisions of patients.

Studies based on real-world evidence take various forms, including pragmatic, “n of 1”, registries and others.

Challenges With Each Model

The randomized controlled trial and the real-world study each have their places in the advance of medical science and the clinical translation of research. Understanding the limitations of each, and addressing those limitations where possible, are key to improving healthcare across broad population groups.

The quality of RCT’s comes at a price – high cost and a long duration. Typical expenditures can be well in excess of $20 million, with Phases 1 through 3 requiring five years or longer. Of course, much more – often in excess of $100 million – is spent on developing the device or drug which is the subject of the trial.

It is therefore not surprising that only well-capitalized, for-profit firms account for the vast majority of RCT’s resulting in drugs or devices which are utilized in the clinical setting.

As summarized below, this commercial motivation behind almost all true RCT’s is a major reason why, as mentioned above, only 10% of medical procedures are based on quality evidence.   This is also why there is such a strong emphasis by regulators, lawmakers, payers, providers and patients on real-world evidence.

Given their enormous investment in product development and regulatory approval, commercial sponsors understandably wish to fashion RCT study designs providing the best chance of success while minimizing costs and time to market.   This has important implications for inclusion and exclusion criteria, end-points, duration of each trial phase, population sample size, investigator selection, and forms of statistical analysis.

A major deficiency of most RCT’s is the failure to capture long-term outcomes. When those outcomes are captured, it is often sporadic and with little correlation to the biological mechanism of action hypothesized for the product originally studied.

The efficacy phase of an RCT may be as short as two years, while the true safety and efficacy profiles of a product may take many years to manifest themselves. Moreover, the consequences of this deficiency are magnified by the narrow scope of the original RCT compared with the large number of “excluded” patient populations for whom that product is utilized.

RCT sponsors, including non-commercial ones, will usually broadly define and carefully protect the intellectual property surrounding the subject matter of the trial. This means that they will sharply limit the dissemination of any information regarding the trial as it progresses. Moreover, even after pre-market or other regulatory approval, original and full data will rarely be available to third-parties for independent analysis.

The limited inclusion/exclusion criteria of most RCT’s materially reduce their relevance to broader patient populations. Comorbidities, multiple medications, genetic markers, age, other treatments are among the clinical realities of most patients, but which the products and treatments supported by RCT’s fail to address.

In prescribing a treatment path for her patient, a clinician may be – implicitly or explicitly – relying on an RCT dating from medical school ten years ago, which was published then five years earlier, and which has had little or no long-term follow-up data.

Indeed, in the context of personalized, regenerative, “omics” and similar medical approaches, it is increasingly difficult to effectively translate RCT’s conclusions to modern clinical practice.

Patients, providers and payers rely on regulators to ensure the accuracy and relevance of RCT data and conclusions.   And, indeed, in developed countries the regulatory framework for pre-market and other approvals is extensive. However, the size, budgets and commercial realities of RCT sponsors should always be borne in mind. These are today, unfortunately, considerably greater that government-funded research and trials.

As articulated by regulators and in the literature, trials and other studies based on real-world evidence should address the foregoing issues with RCT’s, especially in terms of the clinical translation of safe and efficacious therapies based on modern medical science.

For example, a major theoretical advantage of RWE is the enormous amount of relevant data which could, potentially, be captured form the billions of clinical interventions delivered each year.

In practice, however, there are several major challenges.

In the context of real-world evidence, the clinician is the “investigator”, and his everyday clinical cases are the raw material from which real-world data can be captured. Today’s practitioner is, however, already “over-worked and underpaid”. There is little reason for him to spend more time capturing, analyzing and seeking to derive statistically correlations – i.e., real-world evidence -- from real-world data.

A major cost component for RCT’s is patient enrollment and compliance throughout the multi-year timeline of a trial. As in a RCT, real-world evidence requires patient compliance in the providing of benchmark and follow-up data. In principle, most patients take a strong interest in their clinical outcomes. However, modern practice often fails to engage them in a manner capitalizing on this innate interest.

Modern clinical medicine is increasingly complex, specialized and often isolating.   The practitioner is unable to keep with quickly advancing developments in his particular sub-field, let alone in other areas which may have a direct bearing on his patient’s outcomes.

To identify and capture the real-world data inherent in her everyday cases, she requires scientific/clinical expertise to design a real-world study protocol which is clinically efficient, yet statistically significant.

The past decade has seen great interest in “big data”, artificial intelligence and other algorithm-based approaches to developing standards of care. However, these hopes have been largely dashed in most clinical contexts. The main challenges with large datasets – such as claims data, registries or aggregated EHR records -- are the lack of relevant clinical context, source verification and the absence of a connection to a posited biological mechanism of action.

These same challenges must be met to achieve real-world evidence.

As mentioned, in an RCT data ownership and dissemination are tightly controlled by the sponsor. This means that clinically-significant interim results see the light of day years after they occur, if ever, making them of little value in everyday clinical translation.

In theory, real-world data and evidence should be made available to patients and clinicians upon their generation. This requires appropriate consents, patient privacy compliance and other legal structures.

The underlying “n” of datasets from which real-world evidence is derived is a major component of its potential value. This allows flexibility in the study design compared with an RCT. Whereas a typical RCT trial will seek to maximize statistical power with a minimum and carefully defined population sample, a real-world study dataset is much larger, therefore potentially supporting several statistically significant correlations (real-world evidence.)

Nevertheless, maximizing the value of a real-world dataset will depend on incorporating statistical expertise into the initial study design.

As mentioned, the “n” of real-world datasets can be much higher than that of a comparable RCT. Nevertheless, generating real-world evidence from those datasets depends on the application of clinical/scientific expertise, both in the original design as well as thoughtfully querying the resultant aggregated datasets.

As with other best practices in real-world studies, study design and the generation of statistically significant correlations requires a careful accommodation of the dally realities of the busy clinician and his patient, from whom the foundational real-world flows.

Modern practitioners are increasingly isolated in their professional lives due to their heavy caseloads, the hyper-specialization of medical disciplines and other clinical realities.

This is a major challenge to real-world studies which, to achieve their full potential, require active collaboration among practitioners and medical scientists to help identify key clinical questions, efficient approaches to real-world data collections, useful queries for aggregated datasets, and the development of evidence-based standards of care.

Clinicians innately want to collaborate. But the proper systems and processes need to be in place for them to do so in order to advance medicine through real-world evidence.

Evidence-based clinical translation only occurs if practitioners are aware of the specific evidence which is relevant and usable in their everyday professional environment. Fortunately, modern communications channels and networking capabilities enable the rapid dissemination of real-world evidence as it is being developed.

Randomized controlled trials will always have their place for product pre-market authorization and other regulatory hurdles which only large, well-capitalized product manufacturers can afford. However, real-world evidence will play a critical role in addressing the 90% of current treatments lacking adequate support.